The big economic debate at the moment concerns bank nationalisation. Near as I can tell, the intense pressure to consider this is the dramatic fall in share valuations of some of the titans of the banking industry. Here is the recent Bloomberg picture: 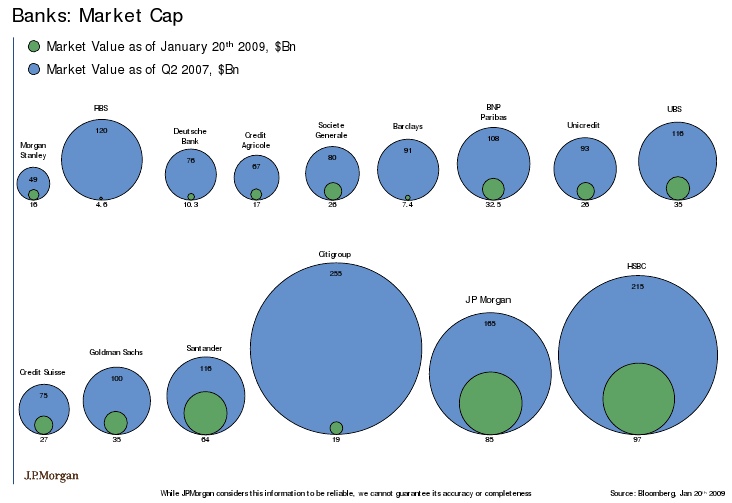 Not a pretty picture. But does it tell us: private investors do not think banks are a good investment.

The question is: does this mean they are a good or better investment for the government? One thing against is that they are still in operation (maybe only barely) and that means that they can still perform some economic function. So we need to frame the nationalisation question the way we would do it if their values were blue rather than green: what would government ownership be able to do that private ownership could not?

It turns out that there is economic research on this issue. Interestingly, the main contributions have come from Australian economists who did this research a decade ago only to be told by international journals that as privatisation had occurred everywhere by then, no one was interested in the conditions under which government ownership would be preferable. Well, I guess that view is wrong.

So what are the contributions? Well, the first stream comes from Simon Grant and John Quiggin. Their argument was simple. The equity premium in financial markets (that is, that stock owners seem to require a higher rate of return than debt holders) comes from an inability to insure against systematic risk. Governments, through their power to tax, can, in fact, provide that insurance and so face a lower cost of capital. End conclusion: so long as there aren’t too many other inefficiencies from pubic ownership, it is preferable to private ownership.

Grant and Quiggin had to dress this up as a paper on social security privatisation to get it in as a shorter paper in the American Economic Review. But this Economica paper deals with the main idea. And it is this line of argument that has driven John Quiggin’s contributions to the recent debate.

But there is a sense that this falls short as a rationale for nationalisation. To be sure, the issue of systematic risk lies at the heart of all this (see Ricardo Cabellero) but there is a difference between the ability to raise capital at a lower cost and ownership per se. After all, if the government can get capital from foreign or domestic borrowers more cheaply than the companies themselves, they should just get that capital and provide cheaper finance. No need to manage assets on a day-to-day or strategic basis if that is the problem you are trying to solve. Indeed, this is arguably precisely what the Australian government is doing with its property fund.

We need to go to the other stream of research to understand why government’s should actually own some assets. Core Economics’ own Stephen King and Rohan Pitchford, in a series of papers, analysed that issue (here and here; the last one isn’t publicly available — apparently these two authors aren’t into open dissemination!). The research is grounded in the property rights theory of the firm. That theory says that it is optimal to grant ownership to agents who are either essential or who undertake important, and not easily contracted on, actions. So, for instance, if you believe that government managers do not have enough incentives to contain costs, you want privatisation. On the other hand, if you believe that there are some big externalities associated with some investments, you might want government ownership. And as examples of the latter consider the disposal of toxic waste and the ownership of the last mile copper Telstra network. In each case, private owners will undertake actions on those assets missing some big externalities (negative and positive) whereas a government might more easily internalise them.

What does this mean for the banks? It means we need to start thinking about externalities. And it is not hard to find some candidates. The first, is the perennial problem that one bank failure can cause a run on others — that is, a given bank may have too little incentive to keep itself operating. At the time, this is a rationale for a bailout but in the long-run, there is a worry that if banks expect bailouts they might take excessive lending risks. Instead, the insurance solution that hits contagion on the head by assuring those who might spread it, depositors, looks like the better bet. Bank owners still face the pain of bankrupcy but with some insurance that that bankrupcy won’t arise because of contagion.

Another externality comes from whether banks are doing the right thing in their lending. This comes from taking bets on poor risk assessments (e.g., subprime loans) or from not thinking enough about what sort of things they finance and their social benefits. The latter is exemplified by the It’s a Wonderful Life image of the benevolent banker (lending for the good of the community) that most banks are not likely to be. The question is whether the government could play that role? It certainly has a broader interest but let’s not pretend that that necessarily translates into a net benefit. In any case, this is a rationale for having a government bank and not necessarily a rationale for making a given bank a government bank.

I want to return to that idea in a second but first let me deal with this apparent objection to private banks that comes from John Quiggin:

Financial restructuring is going to be a huge challenge, involving both a radical redesign of national regulations and the construction of an almost completely new global financial architecture. To attempt this task while leaving the banks under the control of discredited managers nominally responsible to shareholders whose equity has, in the absence of massive transfers from taxpayers, been wiped out by bad debts, seems like doing live electrical work while wearing a blindfold and standing in a pool of water.

But who does he expect to run the government banks? I know there is an excess supply of financial services employers and managers at the moment, but does he really mean to suggest we will find others to do the job. The basic function of banks: as information intermediaries — gathering information on risks and pricing it — will have to be done by those employees of failed banks. Who else will do it? And they will do that job in the face of less powered incentives, which may or may not be a good thing.

Bank to externalities. What about toxic assets? These are loans that look like they will never be repaid. How you work out what these are is anyone’s guess but let’s say you can? The externality rationale for doing something about these is that it would be better if the debt was restructured so it could be paid rather than accept the loss and dispose of the asset. After all, the best customer for a home may be its current occupant especially when house prices are tanking.

Again, is this a rationale for nationalisation? What that would achieve would be some sort of, either burying those assets in a web of cross subsidies within a large government-owned operation or hiving them off into a separate entity. William Buiter seems to think we should nationalise all banks, sort this out, and make a new government ‘bad bank,’ eventually putting the UK on the path to a better outcome. This strikes me as insane as a first thought though I wish I had the confidence to say it would remain insane as time goes on.

The problem is that this is a misconception as to how we think about loans as assets. How to make bad loans into on-going concerns appears to relate to dealing with the customer and so simply having a new government-owner of those does not seem to do anything. At some point, someone is going to have to pay. From an economic point of view, if restructuring is needed maybe that should be done as a matter of policy rather than a case-by-case guess work.

And there is another reason for this. In the ordinary course of events, their ‘home’ banks were solvent they would have ample incentive to restructure loans and keep them going. The externality here is that they might have insufficient incentive because they neglect some broader role the activities funded by those loans are meeting. But it seems to me that ‘toxicity’ is not the dimension upon which we would want to structure a new government bank. Instead, we might want to identify the activities in need of socially desirable restructure and specialise the bank around lending for those purposes. Here is where Australia’s property fund may make some sense.

And it is important to emphasise that this ‘bad’ bank has not real future. Are we really thinking that the role of a government ‘bad bank’ would be to say to prospective borrowers: come to us, we have a great deal because if things tank we will restructure stuff so that you can do what you wanted to do. Now that is moral hazard!

As I write this, I realise I am well beyond the limits of reasonable blogging and am also running out of steam. And I am well aware I haven’t answered the question on bank nationalisation at all save for suggesting that perhaps we should apply the previous literature more systematically.

So let me end with a speculation. The power of the King-Pitchford framework is that it tells us that mixed private-public systems can often be optimal. We need to think of the financial sector in this light. What assets and activities need a public hand? I suspect that a government-owned bank may have its own competitive appeal. First, because it could not fail (or would be last against the wall when the revolution came), depositors may actually find it attractive. They might accept poorer customer service (although it is not a given that that will occur) in order to have security. Moreover, small businesses might prefer to deal with that bank even if it might take longer to get a loan, at least flights and panics in the market wont leave them out in the cold. It would be a rock in the bad times. For that reason, I think we will see a government bank as a key backstop public service and, let’s face it, it will likely arise out of the ashes of one of the failed larger banks.

Some might think that this is related to the idea that we might want Apple to run a bank or two. While I would love a bank that somehow had the same customer orientation and innovation as Apple, I wouldn’t expect that to come from government, nor would I expect that good firms in other sectors should be taking over financial institutions. The core functions remain different and let’s face it, this isn’t an area where we are looking for more product innovation per se. We just want banks to do what they were supposed to do and keep doing it in the good times and the bad.

[PS: My remarks on whether bank mergers are a good idea are here. And they are not. They solve nothing. I’ll take temporary nationalisation over that any day.]